A picnic favorite, the waterballoon toss is the "cleaner" variant of the egg toss. The balloons were quite full and the tossers were eliminated faster than an Asian eating too much dairy.

It was a close race, but Justin and Noel edged out the power pair of Eric and Megan when the pikachu tripped and fell.

The Dragon Boat race seemed simple enough. Five paddlers put on a vest, grab a paddle and sit in their assigned seat. We don't use these vests all that often and they're stored with all the straps pulled tight. It was quite a sight -- Vincent outsmarted himself by attempting to pull on the vest without unbuckling it, but even his thin frame was no match for the vest. Paddler after paddler stood there fumbling with the buckles, unable to loosen the straps far enough to buckle all three straps on the vest. Oh, you had to be there. It was awesome.

I believe this is the first costume party LARD has ever put on and the turn out was quite interesting. Tabitha was as Tom Brady from the New England Patriots. [shhhh I have no idea who that is] She even threw a few spirals that day.

Lilly was a referee or was that a rugby player? Dan became a referee. Justin was something with tights and green hair, and Ging was a sharks fan.

And of course TK. TK was the most adorable little doggy who made a friend indeed.

In the days leading up to our first LARDympics, a news clip was re-posted on facebook about the Kardashians and their dragonboating adventure in Miami, Florida. Karen and Jeannie decided that this would be the perfect "athletic" costume ensemble for us.

Karen arrived with a butt that was awe inspiring. It protuded a good 6" out and was scream inducing [see video]. Kenny and Jeannie arrived in matching similar Kardashian attire. Kenny with his box of gen-u-wine Bruce Jenner Wheaties, Jeannie with a paddle and an attitude.

Now the three of them were quite a sight. Matching black v neck DASH shirts, assets both real and enhanced, and lots of 'tude.

What made the day uncomfortable was the decision to re-purpose some water balloons as Kenny's enhanced chest. Now that was just odd. To raise it to avert your eyes level of discomfort was the absolute fascination almost everyone had with the fake balloon boobs. Otto took more than just one squeeze. You could almost see the drool. It was down right disturbing.

Some of us had a lot of fun coming up with potential items to eat for the eating costest. Do you go with painful like chilis? Most people don't like pain. What about temporary pain, like ice cream or slurpees? Brain freeze sounded like fun, but keeping it frozen until the contest didn't seem plausible. What about just stinky? Stinky tofu sounded like fun except it would probably scare everyone away.

Crystal had it right. Keep it simple. Pudding -- which was much more disgusting than any of us thought it would be, especially with the last minute addition of a blindfolding the eater and having a secondary spoon feed them from behind.

Watermelon. Ah the classic. We had two teams of 3. Chuck, Matt and Vincent versus Justin, Kenny and Eric. Eric was a monster, inhaling his two slices. Kenny almost spewed his watermelon when someone kept yelling to stop chewing and just swallow. Chuck got stuck eating MONSTER slices for his part. Good job, Chuck!

Justin shows us his dodging skills.

So at some point, we figured out that we had to kill the rest of the water balloons, me being the idiot that I am, decided I would go in *front* of the group. One person gets all daring and throws a balloon at me. I'm not nimble and quick like Justin. I just get wet.

Then Steve, then Otto. Gah! Steve can kick my butt, I'll leave him be. But Otto. He may be quick, but I've got age to add to my deviousness. %p At one point, Otto thought he would be safe if he was playing with Charlotte. I wouldn't get Charlotte wet, now would I? This required a plan. I enlisted Jeannie's aid to take Charlotte off of his hands when I was in striking distance. Why? Because she's an awesome girlfriend. So using Tamby as a shield, I crept up behind Otto, waited for Jeannie to pull Charlotte to a safety, and released the KRACKEN! In my defense, I was actually nice and intentionally did not pour it over his head (the water was nassssty). 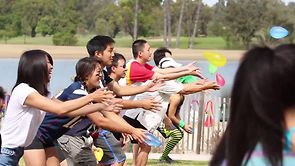