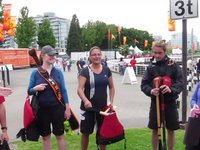 Hope those who made the trek up to Vancouver had a good week settling back in and were able to get back out on the water last weekend, or at least share your experiences with fellow LARDmates. For those who couldn't make it this year, your posts of support certainly made us feel as if you were right there (where is Scott getting these pictures from?)!

From the atmosphere of the Stanley Cup Finals, the slight changes in course and venue layout (relocation of Racers' Village/vendors, including spectator access around Olympic Village for race viewing), and a record roster of 15 guest paddlers-turned-teammates spread out among our 2 mixed crews, this year's Alcan trip felt like a mix of both familiar elements (the city, venue, our local friends, anticipated close competition in every heat) with challenges that we really haven't had to face this season (blending mixed crews with a 40% guest contingent!).

In case you missed it, Yolanda and Gilda went head to head in the Rec B Championship, placing 4th and 7th respectively. (FYI, the Comp C/D Divisions were removed this year.) This, after identical performances in both of Saturday's seeding heats (4th, then 2nd) in which both crews made notable adjustments to improve our starts and transitions, as well as getting acclimated to paddling in the Geminis. A welcome surprise upon loading into the Geminis for the first time that weekend was the absence of the 2" diameter metal poles that used to line the gunnels.

Sunday morning's semifinal performances followed suit with very solid-but-improvable pieces as well, and as anticipated, we set ourselves up nicely for LARD v. LARD III. Despite strong, cohesive finishes from both crews in the finals (0.15 sec between 3rd/4th pl!), overcoming some of the missteps early on during the crucial starts, whether due to over-excitement or momentary lapses in timing, proved to be a bit too much to make up for. Having said that, I'm still amazed by how quickly everyone--new, guest, veteran paddlers alike-- adapted to each other and to our race program. FYI, amidst our crew of 30, we had 7 first-timers to this venue as well!

Racing aside, hopefully everyone took the opportunity to get to know our guest paddlers as well, we had quite a turnout of gracious (and much-needed) volunteers throughout the weekend! Some of them (Kimm, Debbi, John & Jewelee) have paddled with us before, and it has been wonderful reuniting with them year after year, in addition to meeting new friends from within the Vancouver paddling community, as well as from other domestic circles. A few of them we're even likely to see again in San Francisco later this year: Erik, Dan, and Glenys from Victoria, and Gavin from Portland. We were also very fortunate to have Brian Suzuki, GCD's coach, steer for us on several critical occasions.

And of course, many thanks to a whole host of teammates and Team Mom for making these traveling races run so much more smoothly:

- Diane, for arranging our accommodations at the Hampton Inn-- Oh, the PB&Js our team prepared for lunches. Hopefully they don't implement a take-only-what-you-plan-to-eat-HERE policy next year.

- Jessica, our dutiful race manager-turned-caller when we needed it!

As we all prepare for Long Beach in just a few weeks, keep in mind that so much of what enables a crew of 22 to perform at their physical best is having that (mental) fortitude throughout the entire race piece. It takes quite a bit for an entire crew to align each paddler's focus and balance patience with adrenaline & aggression, not to mention the physical & technical aspects of actually paddling in sync. The more you practice together, the easier this challenge becomes. Looking forward to seeing everyone again these next two weekends!

Although I was part of the first lard crew to go to Vancouver, it has been many years since I’ve revisited this city and festival and it feels good to be back. I do kind of miss the old location. I think it had more open space to wander around. The new location, while offering absolutely fantastic views of the race body and finish, felt more constrained as indicated by the number of traffic jams I was caught in getting to and from the paddler's village.

As I'm standing in the center of the dock next to Rich M, I look down into the water. The water is dark and murky. There's a little trash floating here and there as to be expected (unfortunately) in any body of water near a city. What I did not appreciate was the 12 inch used condom floating in front of me. Great. Just great. Like the ingredients in a hot dog, this was another one of those things that we all tacitly agree to feign ignorance for greater peace of mind. Well, I lost some of that innocence that day. *shudder*

Quick nap between each race.

In the early years, we spent more time worrying about what to eat, drink and do post-race than we did the race. How times have changed. We're a much more competitive team now. The Gilda Yolanda split while somewhat controversial was a great opportunity to cross train newer paddlers side by side with veterans. The focus and determination was inspiring and what makes LARD, LARD.

We had awesome guest paddlers and with many of them having the same name as others on the team, there was a lot of, "which one?" responses during boat seating. Our first race of the day wasn't the best in terms of blending and power, but Yolanda got its act together and each and every race thereafter was a testament to our focus and determination. We had a mushy start the first race, and after we talked it out, we NAILED that start the next time. While I love racing, and would never wish anything to go wrong, there is usually at least one item that goes awry, and our first race in the Open division was a doozy. LARD gender doesn't practice nearly as often as mixed and there are often little hiccups the first time out. Now I've been paddling for a long time and I've learned to ignore pretty much anything except our callers. I did hear someone behind us shout "hold" but we were going great, I wasn't holding for anything. And then, I hear "HOLD" again and from my seat on bench 6, I see a hand here and there pause. Jeremy in front of me, pauses. My benchie, Chuck, pauses. I pause. WTF is going on here?! Jeremy hollars, "KEEP PADDLING!" I was so damn angry at myself. The focus and anger was intense. You could feel it in every beat. That much adrenaline and testosterone can't be good for your health. But, you know what was funny. We still placed third even after we paused in the middle of that race. Afterward, we found out that the "hold" call was for lane one and two because of a collision on the start. Thankfully, Sunday was free from any such mishaps.

The only regret I have about the weekend was my silly decision to leave sunday night instead of monday. The last flight out of Vancouver was at 7:30pm and as Eric, Bill and I headed out to the airport at 5:30 we all lamented our decision as we peeled ourselves away from the beer garden. Me being the only fool to have checkin baggage needed to get to the airport even earlier but when we arrived, the first thing we were told was that the flight was delayed 30 minutes. Groan. We could have had two more beers! Grumble.

Belly rumbling. Hungry. What can we eat? As we walk down, stores are in the process of shutting their gates. So that's why 7:30 is the last flight. The airport closes at 7! Now we're panicking. Flight delayed. Hunger pains gnawing at our poor beer filled bellies. We find Burger King (I hate Barfy King), and as Eric finishes his order, they pull the gate closed in front of me. WAIT! I LOVE BARFY KING TODAY! LET ME ORDER! Panick was unnecessary. I ordered some dreck and to our chagrin, the flight was delayed for yet another hour. Finally we board, and as usual, I'm a big guy, so I get to sit next to another big guy who I later figured out was David Blue (he played Eli on Stargate Universe). It is now past one in the morning and I finally arrive home, scaring the crap out of my roommate who was expecting me the following day. Ahh, a good weekend of racing, eating, drinking. Satisfaction.

Triumphant, he returns with dragon head in hand as proof of his battle in the murky waters of False Creek.

This was my family's first time in Vancouver and we – Darlene, Jennifer and I - had a great time.  I would go back without a doubt.  I can't pin-point one specific thing that made it a good trip, but it was the overall experience, from the great accommodations and location to the competitive atmosphere to the on-water competition.  To participate in this was a privilege.  But what I think really did it for us was the people we were with, our team especially, spending time together both on and off the water and the social gatherings.  It continues to build upon a great team spirit which I really enjoy.  Darlene and Jennifer really enjoyed meeting the team as well.

Finding a good place for a bunch of hungry LARDies is always a challenge. This year, we decided to go for a more casual experience at Yaletown Brewery. I'm always nervous when I book a restaurant for the team and I just want everything to go well.

It ... was... great! Just about everybody I talked to loved the ambiance, the wide (and odd) variety of music pulsing in the background and the tasty food. We even got our own little room with an attached patio.

Our dinner got an extra surprise as a magician was sent over to us for entertainment. Normally, I don't really get excited for magic tricks because I know there's a logical explanation behind it, but boy, this magician was great! Or maybe it was because he was our own private magician for a little while. He was making cards disappear from the deck and make it somehow appear in his WALLET which came from his BACK POCKET... and the card was in a ZIPPED compartment! How did he do that?! The craziest part was when he made an entire deck of cards "disappear" from my hands and somehow replaced it with an clear acrylic deck sized block. Everybody keeps asking me "How could you not feel that?!" No, I really didn't feel a thing.

The staff was great too. The manager even came over and handed me a Yaletown Brewery T shirt and a sharpie so that the whole team could sign and write messages on the shirt as a memento of the dinner. His intention was for me to keep it but what's the fun in me hoarding the shirt for myself? Everybody, look for the re-appearance of the Yaletown Brewery shirt later in the year!

A decade of Vancouver Races

Yolanda, Gilda, and our awesome Guests

Goodnight Vancouver. Until next year! (photo by Jeremy Wong)